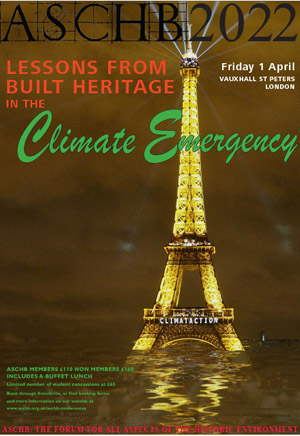 BOOKING ON EVENTBRITE HAS NOW BEEN EXTENDED TO 7.00pm 30 MARCH

The climate emergency is with us now. It threatens our very existence; and to meet the challenge we shall have to change how we build and operate our buildings. The historic environment is often labelled the villain in the race towards a more sustainable future, but as conservation professionals know, it is arguably our most valuable resource.

The 2022 ASCHB conference will aim to draw lessons from heritage, viewing the historic built environment not as a problem, but as a critical part of the solution. It will look at familiar problems with new eyes:

In posing these questions we seek to lay down some foundations for a practical new vision for the future: an interdisciplinary vision that combines the best of both modern and historic technology and practices, avoids maladaptation, and embeds learning and education, so that lessons are learnt and wisdom is passed on.

This is a vision which places the users of the built environment once again at the centre of decisions.

See the programme below for our speakers.

Come to ASCHB2022, join the debate, and be part of the solution!

A limited number of student concessions are available at £65: please contact the Conference Administrator

To book, go online to and follow the link to our Eventbrite page: https://2022-aschb-conference-climate-emergency.eventbrite.co.uk (please note that Eventbrite charges a small booking fee)

Alternatively, you can fill in a booking form and send it together with your payment to the Conference Administrator.

The booking form can be downloaded HERE

The flyer can be downloaded HERE

The booking form is also available in hard copy from the Conference Administrator.

Our fifty-first Annual General Meeting will be held online through Zoom on 21st September 2021  at 6pm.

Please use this link to register:
Zoom Registration
Click on the links for the Agenda and Minutes of the 2020 AGM
The paper presented to the AGM on subscriptions can be found HERE
Our Chairman has written a letter to all members setting out our aspirations for the coming year. The success of our webinars has confirmed that we will be continuing them irrespective of our return to Cowcross Street for face-to-face meetings. We are working hard to plan webinars and visits, especially for northern members. We now have a Member’s Area on the website and hope to post more copies of Transactions there.
The letter reminds members that the subscription has risen to £50 for the coming year 2022 – please remember to amend your standing orders. The full text of the letter can be found HERE.
The report of the trustees and unaudited financial statements can be found in the Member’s Area.

The Themes of the Conference

What do we choose to record, why, and for whom? What is not being recorded and could be lost to the future? The ASCHB 2020 Conference investigates all these issues, examining not just traditional methods of recording but also new technologies and contemporary archiving practices.We will be at the stunning home of the UK’s records, The National Archives at Kew. Hear papers from a wide variety of eminent practitioners whose work in this field has developed alongside the emerging new technologies.Speakers Peter Guillery, Joe Thompson, Alexandra di Valmarana, Carl Brookes, James Hepher, Tobit Curteis, Philippa Turner and Julian Harrap will consider serving not just artefacts but digital material, and reflect on the challenges involved in delivering the perfect archived record. Chairing the proceedings will be Jean Letherby and Ingval Maxwell.Come to ASCHB 2020 and join in the debate!

Students on undergraduate and postgraduate courses and those serving apprenticeships are eligible for discounted places at £65 which just covers the venue costs. Please confirm your student status when booking.Download a booking form here Places can also be booked through Eventbrite, who make a charge for their service, at https://2020aschbconference.eventbrite.co.ukFurther information can be found by clicking to download our poster , flyer and programmeAGM registration begins at 9.00, with the AGM from 9:15-9:50. You can download AGM paperwork here, links updated: 2020 AGM agenda, 2019 AGM minutes. Please download the discussion paper for a proposed increase in subscriptions here Coffee and Conference registration will be from 9:30, with the Conference from 10:00 until 17:00.Networking opportunities with the speakers and fellow delegates will be built into the day. CPD certificates will be supplied on request.

The Conservation of Industrial Archaeology, Buildings and sites in Industrial Use

The Association for Studies in the Conservation of Historic Buildings annual conference was held at the Museum of London Docklands on 15th March. It was attended by more than 75 delegates from many different areas of building conservation and all with an interest in industrial archaeology and a wish to tap in to the expertise of the eminent line-up of speakers. The venue in the heart of London’s docklands added to a day dedicated to exploring issues involved in dealing with industrial buildings and their equipment once their original functions have ceased. There are many challenges and many responses: ‘conserve as found’, adaptive re-use, interpretation to the public as an historic site, to name but a few.

After a welcome from Sherry Bates, chairman of the association, Shane Gould, Historic England’s Head of Industrial Heritage Strategy, kicked off the day by reminding us of the significance of mills with the diversity of their heritage value and the ways their future can be assured. Some can be preserved as working heritage attractions, sometimes supported by the Arts Council, some become subject to demolition as part of an over-arching strategy for regeneration. Shane expressed his concern about the lack of university-based learning in this field.  Many architects, surveyors, town planners and structural engineers pick up the knowledge as they work if they can get into the right roles in the right organisation and take advantage of opportunities offered. Next up was Michael Nevell, Head of Archaeology at the University of Salford. He shared with us the studies of Michael Rix on the growth of industrialisation with the accompanying domestic building developments to house the influx of workers in the 50s, 60s, and 70s. He drew our attention to industrial buildings that can become stunning sites able to grab the public’s attention in their new life.

Henrietta Billings chaired the second session which she introduced with reference to Wentworth Woodhouse, a Palladian and baroque house with an extraordinary wide façade which was subject to open-cast mining right up to its back door in the post-war need for coal. Next up was David Went, a landscape archaeologist and senior investigator at Historic England. His contribution focussed on Elsecar, an iron and coal village in Barnsley’s heritage zone. In the 1850s Earl Fitzwilliam encouraged the mining, bringing in a canal and developing back-to-back housing for the workers, generously proportioned villas for the managers and a church for worship. Mining finally ceased in 1983 but the area had been designated as a conservation area in 1974. Their furnaces supplied the iron plates for HMS Warrior! John Tanner, director of Great Place Wentworth and Elsecar project and he brought together a number of sites of interest in Yorkshire. He is passionate about huge efforts being made to get the interpretation of industrial sites comprehensible as many sites are very complex and unless care is taken people are confused not inspired!

We then all had a very nice lunch and took the opportunity to network with old friends and new acquaintances. Charles Wagner took the chair for the first afternoon session and without more ado introduced the first of a series of case studies. Malcolm Tucker is a caseworker for the Greater London Industrial Archaeology Association and he has been documenting the London Docklands since the 60s. A lot of the ‘regeneration’ of the docks has come at the expense of the heritage of the area. St Katherine’s dock was closed in 1968 and turned into flats, the hydraulic ‘jiggers’ had to be disposed of and the North Stacks whose wooden stanchions were a feature were demolished in 1979. An interesting fact was that as sugar became a regular commodity in the docks cast iron stanchions were needed as sugar is so heavy. A cast iron swing bridge which was purpose built in 1820 was removed and then stolen in 1976! Parts of the docks which had traded in wine, tobacco and skins were turned into retail-spaces but this was an expensive failure. In Wapping the high Customs Wall was retained while demolition took place behind, some cranes and in particular a Scotch derrick were retained until Boris Johnson was London Mayor! We then moved to Shrewsbury for a contribution from Nick Hill, an architectural historian working for Historic England and in charge of the Shrewsbury Flaxmill Maltings which were taken over by English Heritage in 2005 when Neil Cossens was chairman. It is a ‘flag ship’ rescue, it was the first iron framed building in the world – the fire-proof Ditherington Mill was innovative in its time and its mission for the future was transformative “Live, work, learn and enjoy”. Following on was Stephen Clarke, a chartered accountant who specialises in regeneration projects and is a trustee of the United Kingdom Buildings Preservation Trust. In this role he has been instrumental in saving Middleport Pottery, the oldest continuously working china factory whose transformation used new technologies, created jobs, regenerated its community and is now an attraction which welcomes 40,000 visitors a year.

To give a wider perspective the last session of the day was given by Paul McMahon a conservation architect at the Office of Public Works in the Republic of Ireland. He talked about the ‘brown fields of Ireland’ and concentrated on the rapidly changing environment of Dublin Docks and how this is governed by State Protection in the form of the National Monuments Act, The Archaeological Survey and the Record of Monuments and Sites all ratified by the Granada Convention in 1997. In addition local protection depends on the National Inventory and the record of Protected Structures. His position is an advocacy role ensuring capacity building, skills development and provision of CPD is available for all conservation professionals. Sustainable development is key together with adaptive re-use whose success contributed to Dublin’s European Year of Culture.

Providing the end-note was Sir Neil Cossens whose eminence in the field of industrial heritage is legendary. He reminded us that in the UK there is a passion for historic buildings and maybe we are on the cusp of an even greater interest in industrial archaeology. Skansen in the heart of Stockholm was the inspiration for more than 300 open air museums which all feature industrial, agricultural and domestic exhibits. The Henry Ford Museum in USA pays homage to industrialisation, when Ford visited London and saw Stephenson’s Rocket in the Science Museum he wanted to buy it and when told “no” he had five built to exhibit in America! The 2000 publication ‘Power of Place’ discussed the cyclical nature of public interest in heritage and how some projects become ‘orphans’ as a result of negligence. Neil mused that we are approaching a new golden age where industrial landscapes are valued by their communities and are part of their culture and this can be ‘the manure which fertilises the future!’

A short plenary ensued and this was followed by a Docklands Tour led by Malcolm Tucker. A good day was had by all leaving us with much food for thought on this important topic.Diana Rowsell ASCHB committee member.